How to boost your brain power

These days a working knowledge of nutrition has become part of a parent's job description. I'm forever persuading my kids to eat pro-biotic yoghurt, oily fish and crispy kale, with varying degrees of success. If you want to be healthy... I tell them nine times a day. But imagine if you could eat your way to feeling happier, less stressed and more motivated? 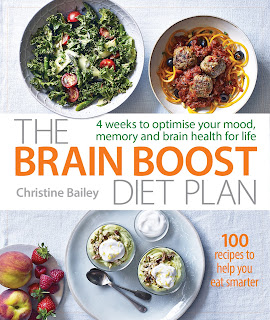 The Brain Boost Diet Plan by Christine Bailey is the latest lifestyle-come-recipe book to promise us good health by cutting out gluten and refined sugar. The book is based on the premise that with the right diet, it takes four weeks to optimise your mood, memory and brain health.

But before you roll your eyes and mutter - not another one - this book is worth a peek. Grounded in nutritional science, it contains a four-step programme to cleanse and revitalise your brain, with lots of tasty recipes that are relatively easy to prepare. It is also well-laid out with plenty of charts, infographics and glossy photographs.

The author, Christine Bailey, is a degree-qualified nutritional therapist and has appeared regularly on the BBC and Sky TV. She certainly appears to know her stuff and diligently explains the complex chemical processes that power our bodies (to the point where I occasionally had to skim over the detail).

The focus is on optimising brain health and thereby avoiding brain disorders, such as depression and Alzheimer's disease in later life. My own grandmother (like Christine's) succumbed to dementia so I was keen to understand more about the role played by diet. The book also draws a strong link between brain health and the condition of your gut.


"[The gut's] nerve cells are bathed and influenced by the same neurotransmitters that affect our brain, so the gut can upset the brain just as the brain can upset the gut."

My overall impression was just how complex our bodies are and how they require a wide range of nutrients to support the chemical processes going on at a cellular level. Christine argues that a low-carbohydrate, gluten-free, Mediterranean style of eating, but with a greater emphasis on plant-based foods, lean proteins and healthy fats is the way to go.

Inevitably, sugar and gluten are public enemies number one (or two). Put simply, over-consumption of sugar creates insulin imbalances in the blood, leading to inflammation in the body, damage to the brain's tissues and, in some cases, diabetes.

Gluten, meanwhile, is often poorly digested, according to Christine, and can cross the gut barrier. This can then trigger our immune system to go on the attack (treating the undigested gluten as a foreign substance). The result is damage to the gut lining and an excess of inflammatory chemicals that affect the whole body, including the brain.

Christine's plan to combat these risks and promote better brain health is broken down into four steps:

What I like about this recipe book is its holistic approach. Clearly the emphasis is on diet, but Christine also advocates exercise, a good night's sleep and various ways of reducing stress. While a good diet can tackle imbalances in the body, it forms only one part of the puzzle.

My quibble is the difficulty of trying to impose a strict eating regime on a family that already has its fair share of fussy eaters. In practical terms, it would be near-impossible to force my kids to completely give up gluten and sugar, or shoehorn them into a four-step programme. Nonetheless, I can see the virtue of trying to reduce our intake of gluten/sugar and Christine's recipes go some way to making this achievable. As Eat Real Food nutritional adviser Emma Wildgoose says, "When you are trying to overhaul your kids' diets, it can be done one recipe at a time."


On the whole, we found the recipes to be delicious, as well as surprisingly easy to make. There are a few wacky ingredients, such as lion's mane mushroom powder, but the recipes we tested did work without them. So far, my favourites have been the lamb meatballs, one-pot Indian chicken (see recipe below) and the prawn laksa. The only one that got a thumbs-down from the family was the mackeral nasi goreng - the mix of bacon and mackerel didn't work for us.

Don't use this book as a rod for your own back. Given a bit of flexibility, The Brain Boost Diet Plan will work for you, even though it doesn't seem to be aimed specifically at families. After all there is nothing more satisfying than watching your kids tuck into a tasty dish that also promotes good health. And, if it helps my daughter to cope with the stresses and strains of teenage life, all the better. A book for your Christmas wish list! 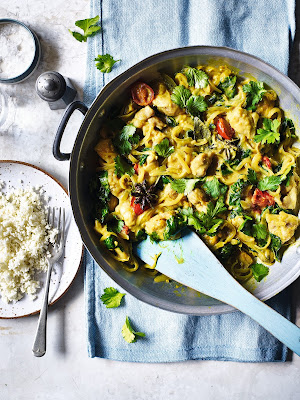 
1. Dust the chicken in cornflour and season with salt and pepper. Heat 1 tablespoon of the oil in a large saucepan over a low heat. When the oil is hot, add the chicken pieces and fry gently for 3 minutes or until they are lightly golden. Remove from the pan and leave to one side.

2. Add a little more oil if needed, then add the garlic, onion and spices, and cook for 3 minutes or until the onion is translucent.

3. Add the coconut milk, bring to the boil, then reduce the heat to a gentle simmer. Add the chicken, spinach, mushrooms and tomatoes. Simmer, uncovered, for 15 minutes or until the chicken is completely cooked through. Top with the coriander and serve.

Brain benefits: This dish contains healthy brain fats due to the addition of coconut oil and milk. The combination of spices helps to lower inflammation in the body and protect the brain cells from free-radical damage. The curcumin in turmeric is able to cross the blood-brain barrier, and holds promise as a neuro-protective agent.


If you enjoyed this post, click here to read more about the perils of eating refined sugar.