Last week I made the mistake of throwing away the bath toys, a ruinous act that prompted my six-year old son to say he could never forgive me. The drama that ensued contained elements of a Greek tragedy: mother-son ructions, moral failings, hysterics and even some soul-searching. Who would have thought that a string-bag of decaying bath toys could have sparked such a crisis? Such are the vicissitudes of family life. One minute it's plain sailing and the next you are caught in the eye of the storm.

It all started with a spot of belated spring cleaning. In a rare fit of enthusiasm, I went through the house like Kim and Aggie on speed. Jigsaws were dispatched to Oxfam, wardrobes were ransacked for old clothes and dogeared drawings from school 'mysteriously' found their way into the recycling.

So far so good. Then my tyrannical eye alighted upon the bag of bath toys, each covered in a veneer of black mould. Middle child (my son) barely noticed them anymore and the mould, I decided, presented a health hazard to Non-walking toddler. Into the wheely bin went Thomas the Tank Engine, stacking cups, one puffer fish, a pink squirty tortoise and several yellow ducks.

Fast-forward to bathtime. Middle child was lying stretched out in the bath, refusing to wash himself while I rubbed Non-walking toddler dry.

"Mum, where are all the bath toys?" he asked languidly.

"Oh, I threw them away. They'd gone mouldy."

"You mean you threw away my squeezy Thomas the Tank Engine?" he wailed. "That was my favourite!"

"Darling, they were covered in mould! It wasn't even worth cleaning them."

"And what about Torty? Please tell me you haven't thrown away Torty!"

"The pink tortoise - that was my absolute favourite. I can't believe you've done this!"

Inevitably tears and lots of shouting (from him) followed... and persisted all the way until bedtime. Never mind, I thought as I switched off his light to the sound of distant sobbing under the duvet, he'll be over it in the morning.

Bathtime, day two, continued in much the same vein. He even muttered the immortal words: "I will never forget this, Mummy, not ever." On day three, he told me, "I can't believe what you have put me through." (See earlier reference to Greek drama.)

Needless to say, I was losing my nerve and sought advice from friends and family. One advised that next time I should "transition" the toys, in other words park them in a cupboard until their absence has gone safely unobserved. My mother advised, "Don't give in - you need to let him know who's boss." Hmm...

Day four found me rifling through the wheely bin in the front garden, only to discover a now fetid bag of bath toys, coated in dead leaves and the entrails of the hoover bag. After half an hour of scrubbing them with hot water and Dettol, I returned them to the side of the bath. As soon as I picked Middle child up from school, I told him I had a surprise. His reaction was euphoric and he has been playing manically with the toys ever since.

"Do you forgive me now?" I asked tentatively.

"Sort of? After every thing I did to get them back..."

"Alright, keep your hair on, I forgive you," he said, giving me a magnanimous hug.

When I told my mother, she was outraged, but I still think I made the right decision. Knowing Middle child as I do, the purge of the bath toys would have become a stain on his childhood. I also had another (self-justifying) motive. By returning the toys, I showed Middle child that if you want something bad enough, and you are willing to persevere, you might just succeed. Not such a bad life lesson. What's more, Torty and Thomas lived to see another day. Now that's a happy ending.

How Jeremy Irons saved us

Last week I encountered the actor Jeremy Irons in the flesh. With his slacks tucked into black boots and his thespian swagger, he was a man to capture an audience. What's more, he might just have changed my life for the better. You think I exaggerate? It started with a trip to the cinema to watch Mr Irons' documentary Trashed about the toxic effects of consumer waste. Afterwards, the audience had the chance to discuss the film with Mr Irons and the writer/directer Candida Brady.

It proved an evening of contrast and emotion: stunning scapes of the natural world juxtaposed against visceral images of rubbish piled high on Mediterranean beaches, Vietnamese children deformed by exposure to Agent Orange and sea life crippled by the consumption of plastic. All of this coated by Mr Irons' mellifluous voice, a rousing soundtrack and the sensation that I had just witnessed something that would change my habits forever.

I like to think of myself as conscientious person - I recycle, I carry a foldaway shopper in my handbag and I wash my dishes with Ecover. However, I am not sure I have ever felt so deeply the importance of recycling or appreciated the scale of damage our society is inflicting on the natural world. A hundred years ago, human waste consisted largely of natural materials - wood, wool, paper - but now we are throwing away plastic at a gargantuan rate. Whereas natural materials break down rapidly, it can take centuries for plastic to decompose.

In the world's ocean gyres (areas with circular currents), hundreds of square miles have been transformed into a soupy mixture of saltwater and plastic. Inevitably sea creatures consume the plastic and suffer immediate effects, or more insidious declines in fertility. It is believed that killer whales (at top of the food chain) could die out in our lifetime. "I am sort of depressed about the sea," Mr Irons told us after the film, "in a big, big way."

Bringing it closer to home, our excessive waste also threatens to have an impact on our own health. The film made a strong case against landfill sites and the use of waste-to-energy incinerators, some of which were shown to release cancer-causing dioxins into the atmosphere. Agent Orange - a powerful weedkiller used by the US during the Vietnamese war to destroy jungle cover - also contains the compound dioxin. The Vietnamese believe the chemical is responsible for high instances of genetic defects in areas that were sprayed. In a powerful scene from the film, Mr Irons stands in a home for some of the children affected, his eyes lambent with suppressed emotion.

At the end of the film, Mr Irons' voiceover declared that we were at a "tipping point". Still in a state of shock, I interpreted this as a negative development, but others in the audience saw room for hope. They were inspired by San Francisco's drive for zero waste, as well as recycling plants that have created new jobs and a way of managing our reliance upon plastic. A man sitting in the front row told us he worked in waste management and admitted he learnt more from the documentary than he had from working in the industry for 10 years.

The main thrust of our discussion post-film was how to change opinion, just as campaigners did with seatbelt-wearing and drink-driving. The European Union is currently looking at banning non-recyclable plastics, including the ubiquitous plastic bag, but grassroots support is also needed. Ms Brady is showing her film in schools, in the hope that our children will build a more environmentally conscious society. As for me? During a shopping trip at the weekend, I firmly rebutted all attempts to put my purchases in plastic bags. "Have you not heard about this film called Trashed?" I asked one bemused retailer.

Mr Irons - on whose celebrity Ms Brady intended to "hang" the film - said he got involved because he thought the subject was "terrible, but also curable". Let's hope we can find some alternative medicine before we tip over into terminal decline.

Review: The Innocents by Francesca Segal

As a mother, I slightly dread the teenage years. All that recklessness and rebellion to contend with, not to mention underwear over saggy jeans and raging hormones. A friend who teaches in a secondary school assures me that teenagers are endlessly fascinating. They see the world in a unique way and are constantly challenging their environment. Yes, fun for the dispassionate observer, but a bit of a trial for any parent obliged to witness her offspring's lovely experiment with liberty. 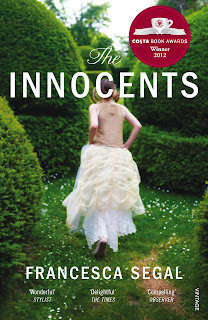 Earlier this week I joined a Mumsnet webchat with Francesca Segal, author of the prize-winning novel, The Innocents. She described this tension between conformity and freedom as a universal conflict. "Navigating between social pressures and individual needs is one of the fundamental challenges of growing up." In her book, Francesca uses a close-knit Jewish neighbourhood in North London "to explore questions and dilemmas that face almost everyone, coming of age - independence versus security; one's own needs versus the needs of a community."
Read more »
No comments: